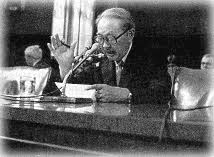 Dr. Hayakawa served as an instructor of English at the University of Wisconsin from 1936 to 1939. He then went on to teach at the Illinois Institute of Technology as an Associate Professor from 1939 to 1947. In 1950, Dr. Hayakawa became a lecturer at the University of Chicago. While in the Windy City, Hayakawa produced a series of 13 half-hour shows on semantics for National Education Television, increasing the awareness of linguistic issues within the academic and general communities. Via radio, Hayakawa also conducted a series of lectures on another favorite pastime of his – jazz.

The mid-point of the 1950s was a watershed year for Dr. Hayakawa, as he was naturalized as a citizen of the United States. It was also in 1955 that he became a professor of English at San Francisco State College, where he would rise to the rank of President of the College in 1968. During his tenure, he was revered for his dedication to academics and maintaining business as usual during tumultuous times. In 1973, Hayakawa was given the title President Emeritus of the then renamed San Francisco State University.

In 1976 Dr. Hayakawa was elected to the U.S. Senate from California as a Republican. He was the first to introduce the English Language Amendment. Concerned about the growing problems caused by the language barrier, Hayakawa founded U.S. ENGLISH upon leaving the Senate in 1983. “Bilingualism for the individual is fine, but not for a country,” Hayakawa said in his support of a common official language. He served as honorary Chairman of U.S. ENGLISH until his death. From 1983 to 1990 he also served as Special Advisor to the Secretary of State for East Asian and Pacific Affairs.

Throughout Senator Hayakawa’s long career he was best known as a semanticist, studying the history of language patterns and habits of thought. He wrote several internationally acclaimed books on semantics, including Language in Thought and Action, now in its fifth edition.