Statement from the Chairman

“Why An Immigrant Runs An Organization Called U.S.ENGLISH.”
-A message from U.S.ENGLISH Chairman Mauro E. Mujica

“I immigrated to the United States from Chile in 1965 to study architecture at Columbia University. While English was not my first language, I am perfectly bilingual today. Learning English was never an option nor was it something to which I objected or feared. It was required for success if I wanted to enjoy a prosperous life in the United States.

“For the last 13 years, I have been proud to serve as chairman of U.S.ENGLISH, the nation’s oldest and largest organization fighting to make our common language, English, the official language of government at the federal and state levels. 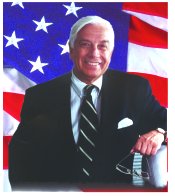 “Why? The lack of an assimilation policy for immigrants to the United States is rapidly changing the successful integration ways of the past. Gone are the days of the American Dream and the upwardly mobile society for immigrants. In its place are low expectations and government policies that encourage Americans to learn the language of the immigrants, instead of the other way around. According to the U.S. Census, 21.3 million Americans, or 8.1 percent of our total population, speak English less than very well, including 11 million who speak our common language not well or not at all.

“Suddenly, English, the greatest unifier in our nation’s history, has come under attack in our government, in our schools and in our courts. The question is no longer what a immigrant can do for his/her adopted country, but how government can adapt to millions who have not assumed their duty to learn America?s language, customs and culture.

“Let me be clear: Encouraging immigrants to learn English is not about bigotry or exclusion. On the contrary, teaching newcomers English is one of the strongest acts of inclusion our government can provide. The whole notion of a melting pot culture is threatened if immigrants are not encouraged to adopt the common language of this country.

“We’re not suggesting that people give up their native languages. Bilingualism can be quite advantageous in our fast-paced global economy. I, in fact, speak four languages.

“While using a multitude of languages in business, at home or in worship is valuable, it is burdensome, inappropriate, and divisive in government. What’s more, it only serves as a disincentive to immigrants to learn English; the language 97 percent of our country speaks. We believe it makes far more sense to funnel the money spent on translation services to providing newcomers with the most important instrument in their life’s toolbox – the knowledge of English so they can go as far as their dreams take them.

Join us. Support us. Fight with us. Because English is the key to opportunity for all new immigrants.”